It was late October. COVID infection rates were rising around the world, including in New York City, and the nation seemed poised for a chaotic ending to a long and bitter presidential campaign. 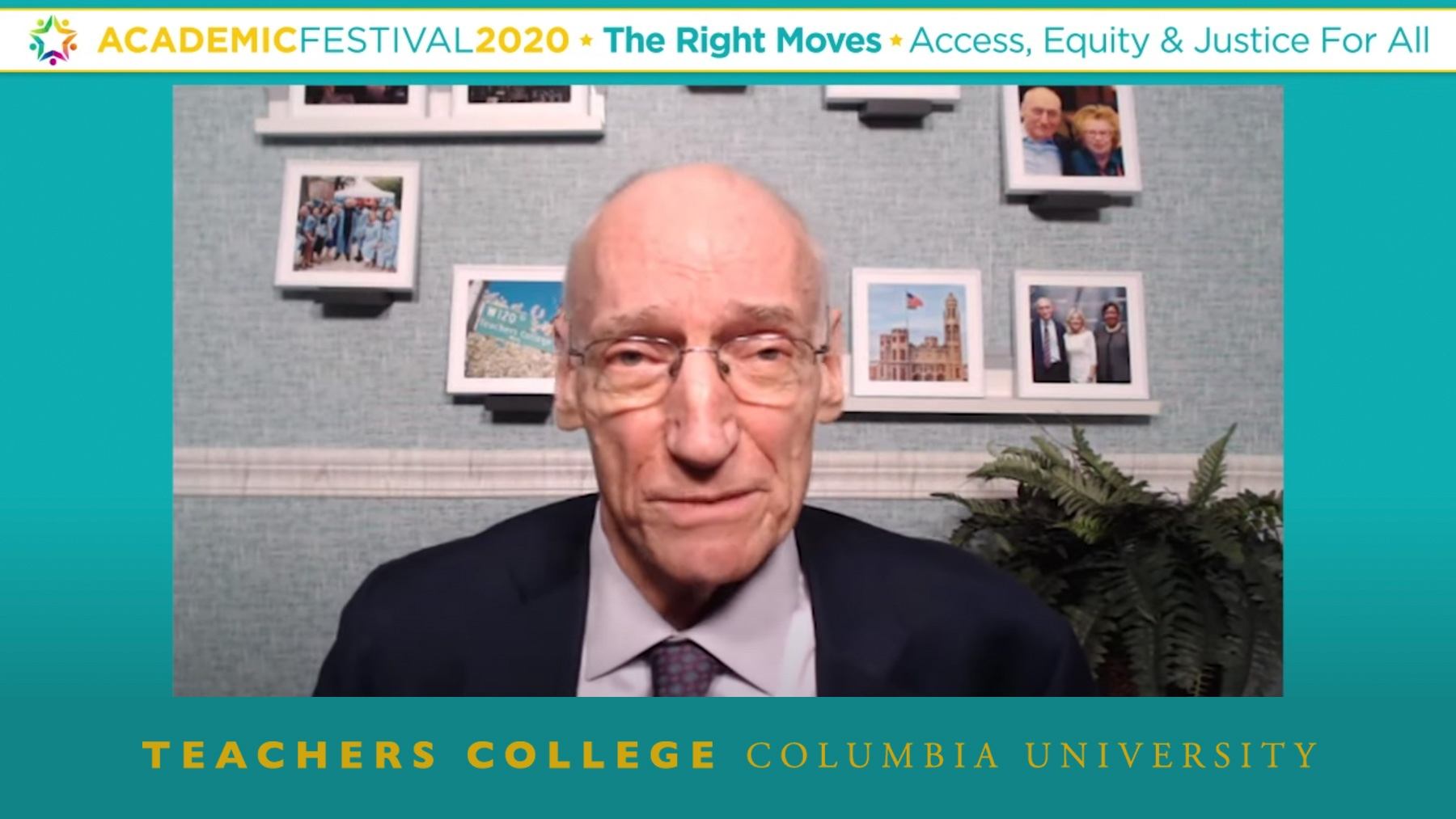 “It’s understandable if you’re thinking, ‘Let’s just get through the election and this horrible pandemic,’” Bailey said. “But here’s the flaw with that line of reasoning. None of the serious problems facing us today suddenly surfaced in 2020 on their own. Each one was many years or decades in the making, and none of them will be solved overnight.”

None of the serious problems facing us today suddenly surfaced in 2020 on their own. Each one was many years or decades in the making, and none of them will be solved overnight.

It was a fitting benediction to an event that, while celebrating ideas and people, often felt like a working meeting, aimed at pooling ideas and developing new solutions.

Explore more of our programming from this year's virtual event:

“TC’s strengths and cross-collaborations in education, psychology and health uniquely position the College to understand the origins of these crises and lead the conversation on how to address them,” said Rosella Garcia, Senior Director of Alumni Relations, whose office produces Academic Festival.

[In addition to the stories flagged here in the margin, be sure to check out Still More Programming from Academic Festival 2020.]

The challenging and often provocative program kicked off on Tuesday, October 20th, with a discussion of the award-winning film, “Welcome to Chechnya,” which documents the efforts of activists to smuggle members of the LGBTQ community out of a country that has a launched a brutal assault on their lives. While the conversation, which featured the film’s director, David France, and its executive producer, Lambda Legal President Kevin Jennings (M.A. ’94), focused largely on homophobia around the world, recent TC graduate Dylan Kapit (M.A. ’20) focused on parallels in the United States.

“It is important to know this type of violence is happening here, too,” said Kapit, now pursuing a doctorate in Special Education at the University of Pittsburgh. “LGBTQ people living in many states still face discrimination in housing, employment and health care. It is not a thing that happens in other countries.”

Other featured events similarly focused on understanding the plight of oppressed people from the inside out.

In accepting TC’s Morton Deutsch Award for Social Justice, Rob Gore, Founding Director of the Kings Against Violence Initiative and Clinical Assistant Professor at Kings County Hospital Center, spoke movingly of the social factors that underlie the high rate of violent traumatic injury that kills so many young men of color.

“It’s not just because of gun violence and gun access,” said Gore. “We have to understand the conditions and situations that give rise to that violence.”

In a panel on the future of higher education, four leaders in the field, moderated by Bailey, pondered the steep inequities and challenges faced by poor and minority students, who predominantly attend public colleges and universities. Charging that many of these institutions are seeking to attract the most impressive students by giving merit aid at the expense of need-based aid, Mildred Garcia (Ed.D. ’87, M.A. ’85), President of the American Association of State Colleges and Universities, declared that “we need to be a little bit stronger, a little bit bolder, in fighting for the new majority — the first-generation, the low-income, the students of color.”

In a fascinating talk on a new technology paradigm she calls “artificial enlightenment,” Vanessa Colella (M.A. ’96) , Chief Innovation Officer at Citi, sketched an egalitarian vision of tools that augment, rather than simply mimic, human intelligence, making it possible for people to focus on nuances of information that are relevant to their own lives.

We need to be a little bit stronger, a little bit bolder, in fighting for the new majority — the first-generation, the low-income, the students of color.

“Think about how many times you’ve looked at the unemployment statistics this year,” Colella said. “Certainly, we know that job dislocation has been something that we never could have predicted. But the aggregate number doesn’t really help you, right?”

Viewers also heard from Sandra Kapell (M.A. ’93), Executive Vice President and Chief Administrative Officer for Madison Square Garden Entertainment Corporation, on the importance of planning to support a company’s people. And Val Ackerman, Commissioner of the NCAA’s Big East Athletic Conference (and mother of a current TC student), talked about her groundbreaking efforts to make social justice issues an overt focus of the Conference.

Similarly, this year’s alumni recipients of TC’s Distinguished Achievement, Early Career and Distinguished Service Awards are all innovators who have introduced more socially just approaches in fields ranging from the teaching of mathematics to women’s athletics, from the application of the law to education issues. 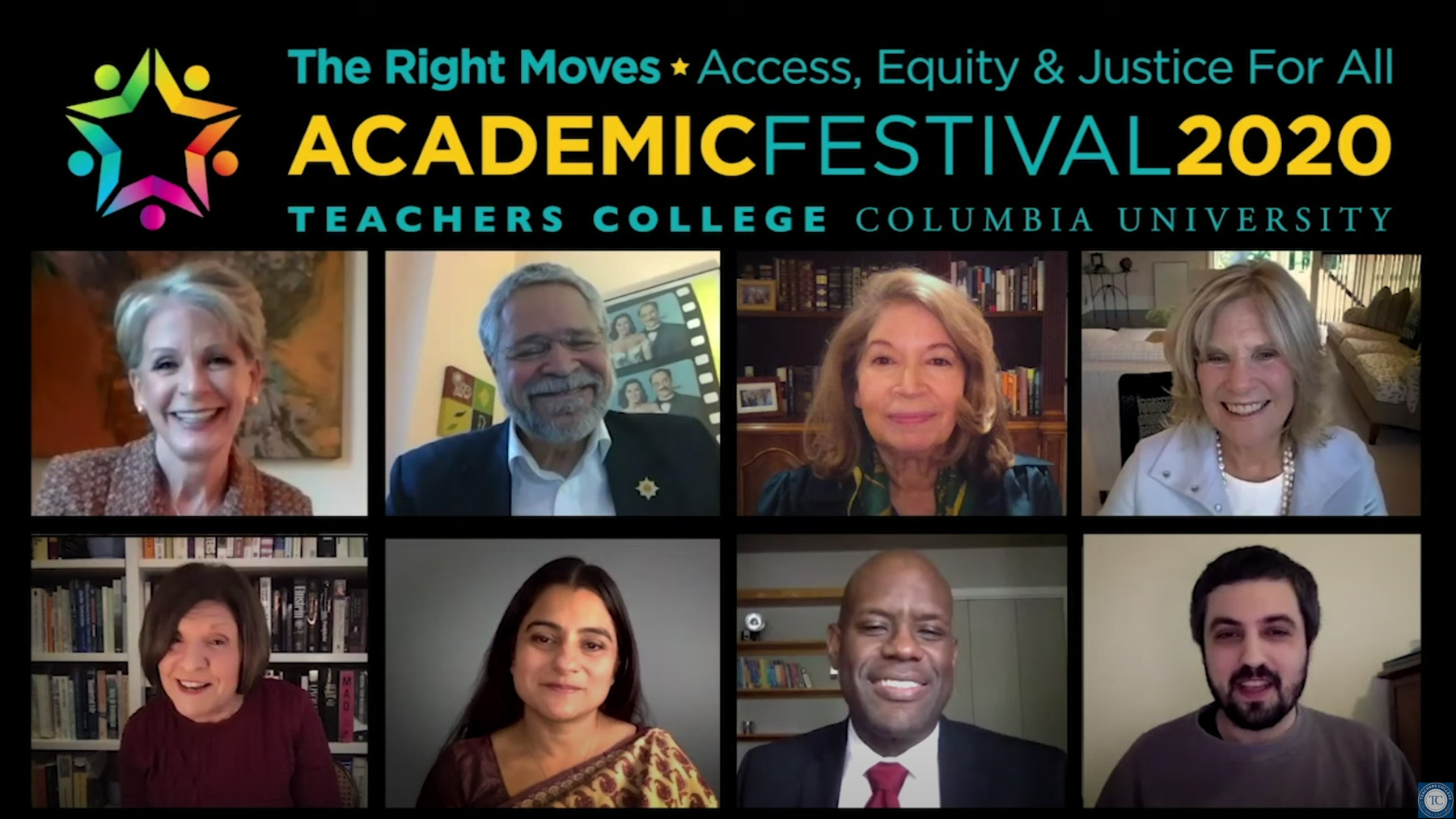 Even the winning entry for this year’s student research poster contest had a social justice theme: “Scarcity & the Brain: Does Financial Deprivation Affect Learning & Memory in Adolescents?”

Growing up in poverty, there were times when I couldn’t focus in class because I was too hungry or distracted during a test, because my parents couldn’t afford the rent that month. Sadly, this is an ongoing problem that affects millions of students of enduring poverty.

“Growing up in poverty, I encountered many financial obstacles in pursuit of my own learning,” said author Gabriel Reyes, who is pursuing a Masters of Science degree in the College’s Neuroscience & Education. “There were times when I couldn’t focus in class because I was too hungry or distracted during a test, because my parents couldn’t afford the rent that month. Sadly, this is an ongoing problem that affects millions of students of enduring poverty.”

In short, no one was blinking away the daunting backdrop against which the Festival was held. But alumna Leticia Guimarães Lyle (M.A. ’11), speaking in a panel on the COVID pandemic featuring alumni from around the world, said she felt “nourished” by the opportunity to share experiences and ideas with other members of the TC community.

Bailey echoed that sentiment. “This is the first time we have devoted an entire week for our alumni homecoming and the first time we came together for AcFest virtually,” he said. “After all this time, it feels strange making eye contact with a screen instead of a live, in-person audience — but we’re all connected as one global family and we’re all here for one another.”

Tags: At the College Alumni