Educating Citizens for a Global Era

How to inculcate new citizens with shared national values, without marginalizing minority cultures? The answer, according to James Banks, is at least in part to focus on values of tolerance and inclusion. 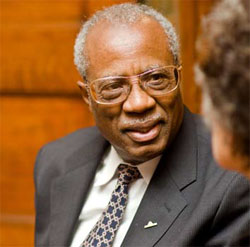 TC's annual Tisch Lecturer this past fall was James Banksâ€”the Kerry and Linda Killinger Professor of Diversity Studies and Director of the Center for Multicultural Education at the University of Washington.