When Doug Wood arrived at Teachers College last year to head the fledgling National Academy for Excellent Teaching, he hardly seemed, at first glance, like the man to upgrade literacy in some of the city's worst-performing high schools. 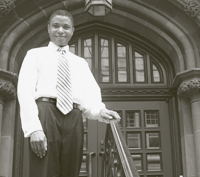 Wood and NAFET are working with teachers and Principals.