Jerome Bruner has encountered many brilliant thinkers during his 90 years - including Jean Piaget, with whom he founded the field of cognitive psychology - but perhaps the greatest influence on his intellectual development was his older sister. 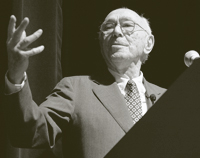