“Stand for Justice”: At TC’s first master’s degree ceremony, graduates are given “an assignment for life”

“You have an assignment for life – and that is to speak, act, disrupt, challenge, critique and help curate and birth images of what could be, to plant a seed of radical possibility,” Teachers College alumna Michelle Fine told graduates at the College’s first master’s degree ceremony, held Monday afternoon in the Cathedral of St. John the Divine.“

Addressing graduates of the Departments of Arts & Humanities, Curriculum & Teaching, and Mathematics, Science & Technology, Fine (Ph.D., 1980; M.Phil., 1979; M.A., 1978), Distinguished Professor at the CUNY Graduate Center, invoked her upbringing as the youngest daughter of Jewish parents who fled Poland as children.

“I learned young that in immigrant homes – maybe in all homes – someone holds the pain while others embody optimism – I learned that hope and despair live in the same house; in fact they sleep together,” said Fine, who received TC’s Medal for Distinguished Service. The community as a whole, she added, is likewise “entangled with ...the families who live in private and public housing just north of here; the lady who cleans the bathrooms at TC; the formerly incarcerated students in your classrooms, and those on the corners; the undocumented students who shiver at night and the trans fourth-grader who hasn’t told anyone.” 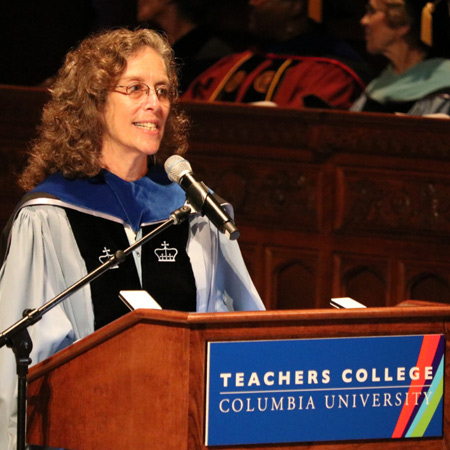 Speak, act, disrupt, challenge, critique and help curate and birth images of what could be...plant a seed of radical possibility.

Honoring her late friend and mentor, the iconic author, philosopher and TC Professor Maxine Greene, Fine challenged the Class of 2019 to “be bold, to fully embrace your TC essence; to never forget that you come from TC: a proud, unapologetic lineage of mouths, hearts and courage.” She called on the graduates to “stand for educational justice, labor justice, and racial justice as though they were one word” and to “defend the last socialist institution in the U.S. – public schools.”

TC President Thomas Bailey told the degree recipients that “as our teaching and education graduates, you – more than any other group of professionals – will guide the next generation onto the path toward mutual understanding and mutual respect,” because “you have been and will be working on the front lines with young people whose attitudes and biases have not yet hardened – who are most open to new ideas.” 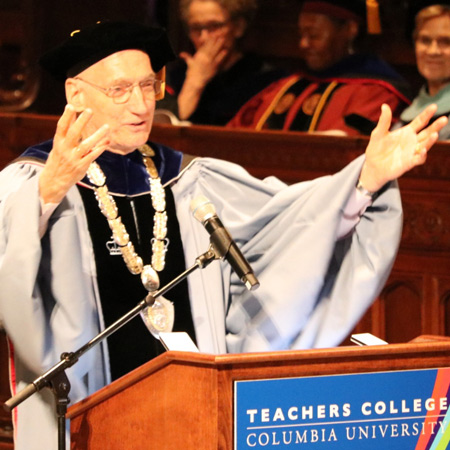 As our teaching and education graduates, you – more than any other group of professionals – will guide the next generation onto the path toward mutual understanding and mutual respect.

Bailey offered a pointed reminder of the responsibilities borne by those who have dedicated themselves to the education of others.

“All of you – educators, artists, administrators, scholars, leaders – all of you will play a vital and decisive role in educating young and future generations to flourish in mind, in body, and in civic spirit,” Bailey said. “You will teach them to become well-informed citizens who can treat the environment with care and one another with respect. You will teach them to distinguish truth from lies, and real facts from ‘alternative facts.’”

Student speaker Alexander I. Wojcik, receiving his M.Ed. in the Philosophy & Education Program, offered a vision of educators as facilitators rather than heroes. 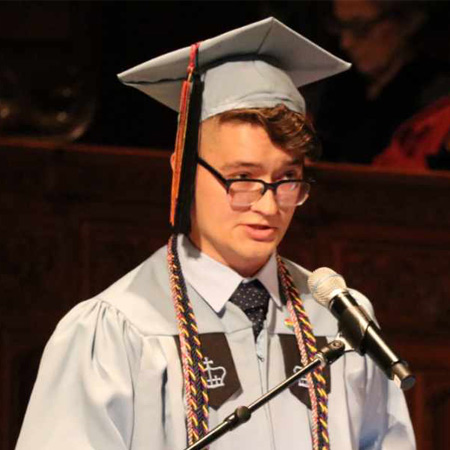 As educators we are charged with carving that path so that our students may more easily travel on it at our sides.

“Our purpose is not to change the world,” Wojcik said. “Rather, we are meant to make it accessible. Education is not only a tool, but also a path. And as educators we are charged with carving that path so that our students may more easily travel on it at our sides. As educators, the burden of the future is often placed on our shoulders. And while it is a valiant goal to change the world, and don’t get me wrong, I at times like playing the role of super hero, that is not our purpose. Our purpose is to ensure that our students are the super heroes. We are not meant to change the world they live in, but, rather to ensure that they can live in it.”

The TC Chamber Singers, under the direction of 2019 Music & Music Education Program doctoral graduate Derrick Thompson, punctuated the afternoon ceremony with the disco classic “Turn the Beat Around” and “Smile,” from the Nat King Cole songbook.