America’s gun violence epidemic is a horrific situation that persists despite overwhelming public support for obvious remedies. But responses to the crisis also demonstrate that, even in the face of powerful lobbying interests and Congressional gridlock, grassroots change is possible. Exhibit A: a story that began with one woman’s response to the 2012 massacre at the Sandy Hook Elementary School in Newtown, Connecticut.

Today, more than 6 million Americans are aligned with the grassroots organization Watts launched in her Indianapolis home.

Kicking off Convocation week at the College, the dialogue between Watts and Sonali Rajan, Associate Professor of Health Education, herself an advocate for evidence-based measures to deter gun violence, was the first of three discussions between TC faculty and 2020 TC Medal of Distinguished Service recipients whose honors were deferred because of the pandemic.

In talking with Rajan, Watts confided that she launched Moms Demand Action with threadbare knowledge about advocacy work. “I sort of built the plane as I flew it,” she said of a movement patterned on Mothers Against Drunk Driving. 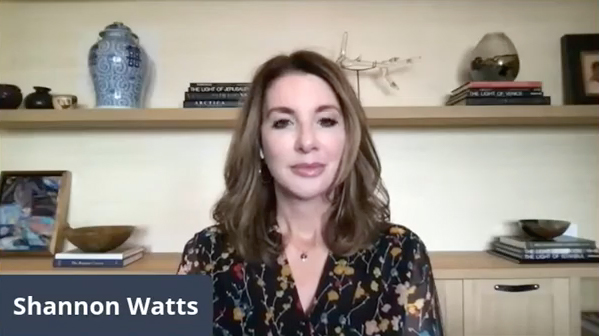 Watch the conversation between Shannon Watts and Sonali Rajan

But with 400 million guns circulating, contributing to 100 firearm deaths and over 230 injuries each day — and with a mass shooting having occurred daily thus far in 2021 — the work is far from done.

“We are creating relationships with Republicans and independents, but it’s still going to take a long time,” Watts said. “The only place that this is a polarizing issue is the U.S. Senate. Because, when you look at America broadly, 90 percent of Americans support background checks — and that includes 89 percent of Republicans and 87 percent of gun owners.”

The only place that this is a polarizing issue is the U.S. Senate. Because, when you look at America broadly, 90 percent of Americans support background checks — and that includes 89 percent of Republicans and 87 percent of gun owners.

Rajan, a co-founder of the Columbia University-based Scientific Union for the Reduction of Gun Violence (SURGE) and co-producer and host of a podcast that explores holistic, non-legislative solutions to gun violence such as the creation of green spaces and improvements in public housing, asked Watts whether such approaches were gaining traction among gun safety or anti-gun violence groups.

“When I started Moms Demand Action I was a white suburban mom who was afraid my kids weren’t safe in their schools. That is what got me off the sidelines,” Watts replied. “Shame on me for not realizing that it isn’t just about mass shootings or school shootings — that’s about one percent of the gun violence in this country. It’s really about gun homicide, gun suicide or unintentional shootings. It’s all senseless and preventable. The truth is there isn’t a ‘silver bullet.’ It is going to take a safety net of solutions.”

Watts has been especially encouraged by the youth activism that followed the 2018 Parkland High School massacre: “It took me years to find my voice. And to see people who aren’t waiting until they are in their 40s to speak up, act up and hold their elected officials accountable is really inspiring.”

[Read a story about Sonali Rajan's recent interview on C-SPAN with John Woodrow Cox, author of Children Under Fire: An American Crisis, and watch the podcast of the interview.]