Recalling the Unspeakable, with a Message for Today

Amra Sabic-El-Rayess initially hung up on the caller who saved her life.

It was the early 1990s, and Sabic-El-Rayess, a Bosnian Muslim, was a teen-ager, trying to survive the Serbian military’s brutal “ethnic cleansing.”

Several months earlier, two American relief workers — Wayne and Drew; she never learned their last names — had asked if she wanted to come study in the United States. She’d given them all her papers — birth certificate, transcripts, everything. If they lost them, she reasoned, it didn’t matter — she’d never need them again because soon, she’d be dead.

“During those years, every day, someone I loved, I played with, or I knew died,” Sabic-El-Rayess told a rapt audience in November when she delivered the inaugural Charo Uceda Women’s Lecture at Teachers College, where she is Associate Professor of Practice in the College’s Department of Education Policy & Social Analysis. “It felt as if I stood in a quickly moving line for execution, waiting for my turn, and it was only a question of how and when.”

Six months after speaking with Wayne and Drew, Sabic-El-Rayess was volunteering at a local hospital when the phone rang. She picked it up, she recalled, and “someone on the other line says, ‘Amra, we’re glad we found you, that you're alive. You have a benefactor who wants you to come and study in the United States, and they're going to fund your scholarship.’”

It felt as if I stood in a quickly moving line for execution, waiting for my turn, and it was only a question of how and when.

Sabic-El-Rayess paused, while the overflow crowd in Milbank Chapel waited breathlessly. “And I hung up. “I just thought it was evil for someone to pull a prank of that kind.”

It wasn’t a prank. The woman called back and, soon after, Sabic-El-Rayess was leaving for the United States with $20 in her pocket and just a few words of English.

Today Sabic-El-Rayess, whom TC President Thomas Bailey introduced as “a brave and eloquent witness to the horrors of ethnic cleansing in Bosnia,” is an accomplished scholar, mentor and activist who, in addition to her TC appointment, sits on or consults for numerous boards and globally renowned institutions, including Women’s March Global and Columbia University’s Harriman Institute for Russian, Eurasian and East European Studies. Her scholarship focuses on tribalism in government, on corruption in higher education systems, and on the foundations of religious extremism.

As part of her lecture, which was titled “How to Empower and ‘Un-Other’ Yourself?”, she recounted some of the details of the extraordinary journey that has brought her to the present moment. 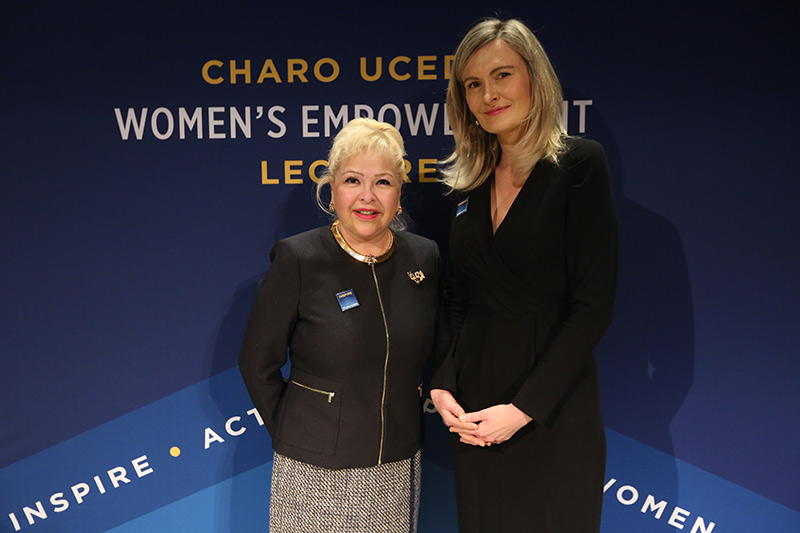 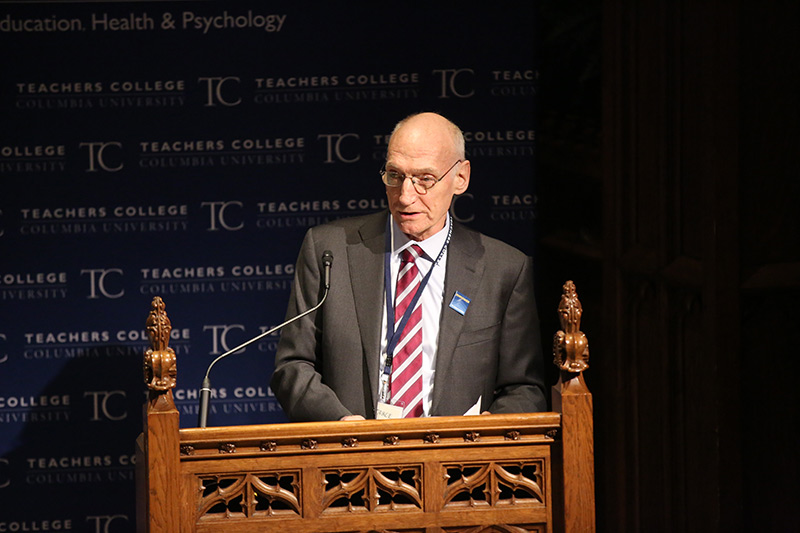 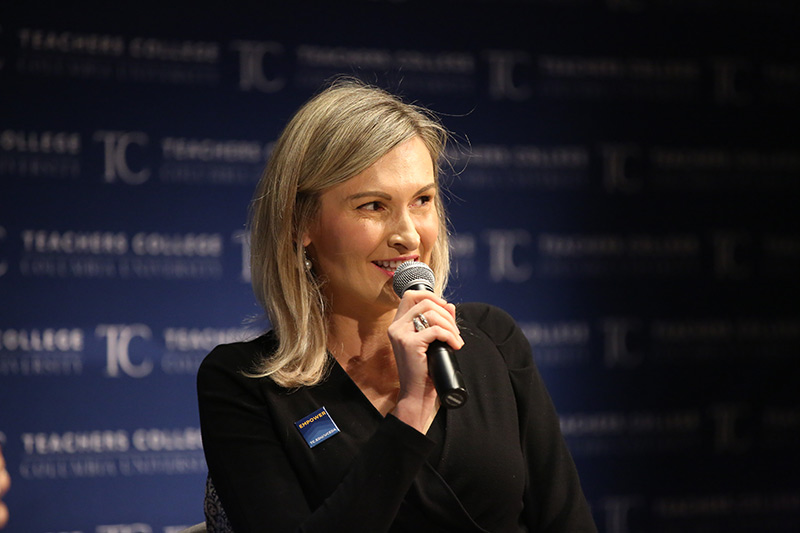 “I KNOW WHAT I’VE BECOME” Sabic-El-Rayess pledged to spend the rest of her life “resisting and challenging any and all forms of othering.” (Photo: Bruce Gilbert) 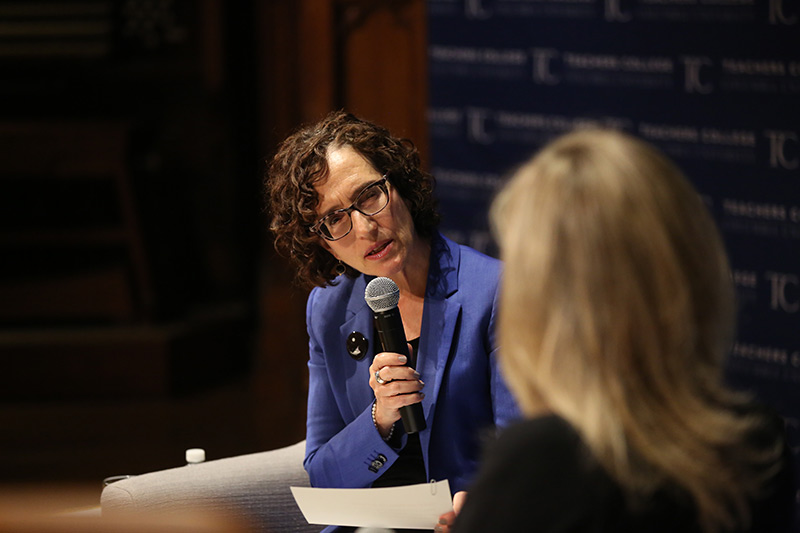 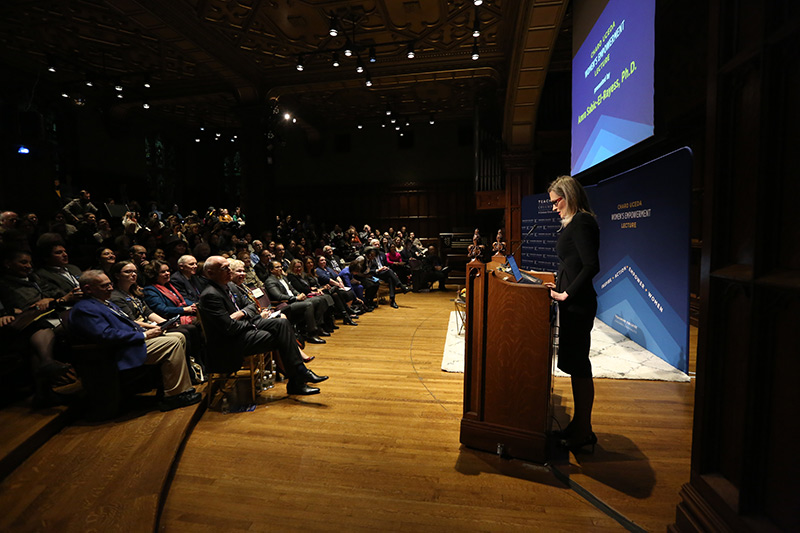 “I have to admit, tonight is not an easy evening for me,” she said during one of several moments when she was visibly fighting to control her emotions. Yet, after years of not sharing her story, she felt compelled to speak out, she said, not only on behalf of friends, classmates, and relatives who were raped, killed, and tortured in the former Yugoslavia some 25 years ago, but also because of what’s happening in her adopted country today.

“A Bosnian story of ethnic persecution of a young Muslim woman may seem distant and perhaps not relatable to many of you, but the violence and exclusion we are witnessing today in the United States mirror my own story,” Sabic-El-Rayess said. “I share this story not to have you feel sorry for what I lived through but in hope that when you next see an image of a toddler drowned next to his father on the U.S. border with Mexico or when you see a Syrian boy wash up on the shores of the Mediterranean Sea, you remember my story and the risks one is willing to take to survive. I hope in those images you will no longer see ‘Mexican migrants’ or ‘Muslim refugees,’ but human beings with courage and resilience. I hope you will see what they could have been.”

I share this story...in hope that when you next see an image of a toddler drowned next to his father...or a Syrian boy washed up on the shores of the Mediterranean Sea, you remember my story and the risks one is willing to take to survive.

Hiding her own “otherness,” she added, was part of how she remained resilient – but at great cost: “I desperately wanted to belong,” she said. “I never once prayed. I never talked about my Muslim identity. I stayed away from Islam as if it were a plague.”

She found empowerment through education, activism, and using her voice.

“Genuine activism is both self-empowering and empowering. It helped me transition from a silenced and marginalized individual into a young woman driven by engagement and education, which remain my responses to violence and hatred.”

Indeed, Sabic-El-Rayess read an excerpt from her latest response – her forthcoming memoir, titled The Cat I Never Named: A True Story of War, Love and Survival (to be published by Bloomsbury in the fall of 2020). The scene she chose described a late-night train ride from Belgrade, Serbia, where she was attending classes, to her home in Bihać, Bosnia. The young Amra manages to avoid harassment or worse by a group of Serbian soldiers because they don’t realize she’s Muslim, but the encounter leaves her badly shaken:

Yugoslavia is falling apart. Trapped on this train with state-sponsored murderers and rapists who are boasting of their crimes, I truly realize for the first time that I can be hated by a stranger, simply for who I am, for the way I was born.

In a post-lecture discussion with Jane Eisner, Director of Academic Affairs at Columbia University’s Graduate School of Journalism, Sabic-El-Rayess said she was fortunate to be at Teachers College, where she has a forum to address issues of Islamophobia and radicalization head on.

We need to create turbulence in the classroom. And that means having direct, open, difficult conversations.

“We need to create turbulence in the classroom,” she said. “And that means having direct, open, difficult conversations.”

The Uceda Women’s Empowerment Lecture series is endowed by TC alumna Charo Uceda (M.A. ’08), who asked the final question of the evening: Were you prone to hate the people that were your tormentors?

Sabic-El-Rayess responded with a story.

While a graduate student at Columbia’s School of International and Public Affairs, she was recruited for a research project in Bosnia, working with an organization helping former soldiers reintegrate into civilian life. She was being asked to speak with—and help—soldiers who may have killed members of her family.

She agreed, with the caveat that she could withdraw if it proved to be too much. “I was curious to find out where I stood emotionally,” she said.

She returned to Bosnia and, in the process of interviewing Serb soldiers, helped one particular soldier who was hoping to get a cow so he could start a farm: “I went really beyond everything that was expected of me and helped him.”

When the project was over, the soldier called her, sobbing, asking why she had helped him. She told him she didn’t want to be like her tormentors. She wanted to respond to violence, not with hate, but by doing something constructive.

“He shared with me that he couldn't sleep at night, because of the people that he had killed, people that he had harmed. And he said to me that it would be harder now for him to go to bed at night, knowing that someone he targeted responded in a very different way, in ways that supported him through this project. But I went to bed that night feeling really good about who I was.

“I know exactly who I have become, and I know I will spend the rest of my life resisting and challenging any and all forms of othering.”