Living the Theme: Academic Festival, on pathways for flourishing, spotlighted barriers to college for low-income youth

Teachers College has featured many big-name speakers at its annual Academic Festival, but for sheer straightforward eloquence, none can top Enoch Jemmott.

Jemmott, featured in the documentary Personal Statement, about three Brooklyn high school students who serve as college guidance counselors for classmates, spoke as a panelist after the film was screened at TC on April 13th at Academic Festival 2019.

Asked how he felt about the recent college admissions scandal in which wealthy parents engaged in criminal schemes to get their kids into elite schools, Jemmott, whose mother is homeless, said he imagined himself at the foot of a wall that more affluent peers were scaling using $15,000 ladders.

The moment vividly underscored the urgency of this year’s Festival theme, “Creating Pathways for All to Flourish,” which “captures the essence of TC at its best, and also reflects my dream for bringing out the best of our TC community and extended family,” said Thomas Bailey in opening the College’s 11th Academic Festival (and his first as President). Amending the words of the psychologist and TC alumnus Rollo May, Bailey said that “Education is the human capacity to take a hand in our own flourishing,” adding that “at TC we excel in applying what we know to building on that capacity in our students, and in the individuals, families, schools and communities that are served by our thousands of alumni – and ultimately, in ourselves.”

In fact, capacity building, though “not the world’s most colorful term,” is ultimately “why people turn to us for help,” Bailey said. He cited numerous examples, but in summation said, “You see it most in societies that turn to us to take the lead in using our skills – our teaching, our research, our students and our outreach to the community – to try to make a better world. To try to emphasize and increase the importance of equity, inclusion, and opportunity for every student and every individual in society.”

As Personal Statement wrenchingly depicts – and as the panel at Festival moderated by Liz Willen, Editor-in-Chief of The Hechinger Report (the nonprofit, independent news outlet based at Teachers College) reinforced – public schools today are falling far short of the mark when it comes to helping young people from under-served communities make the critical leap to college campuses.

In the film, Enoch Jemmott, Christine Rodriguez (who also spoke at Academic Festival) and a third student, Karoline Jimenez, valiantly try to help others navigate the financial aid system, the interview process and, of course, the writing of personal essays, even as they struggle with their own college applications and difficult home lives. 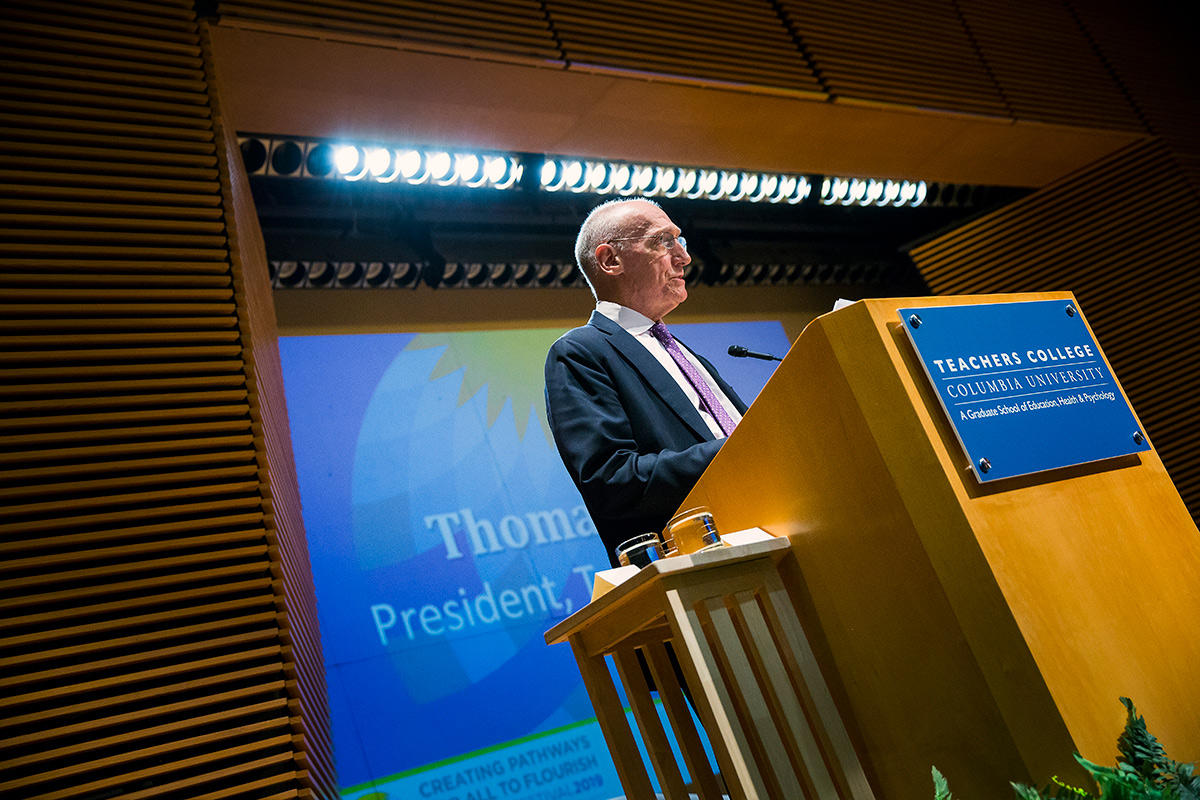 TAKING A HAND President Bailey said he sees education as an opportunity for people to directly influence “their own flourishing.” 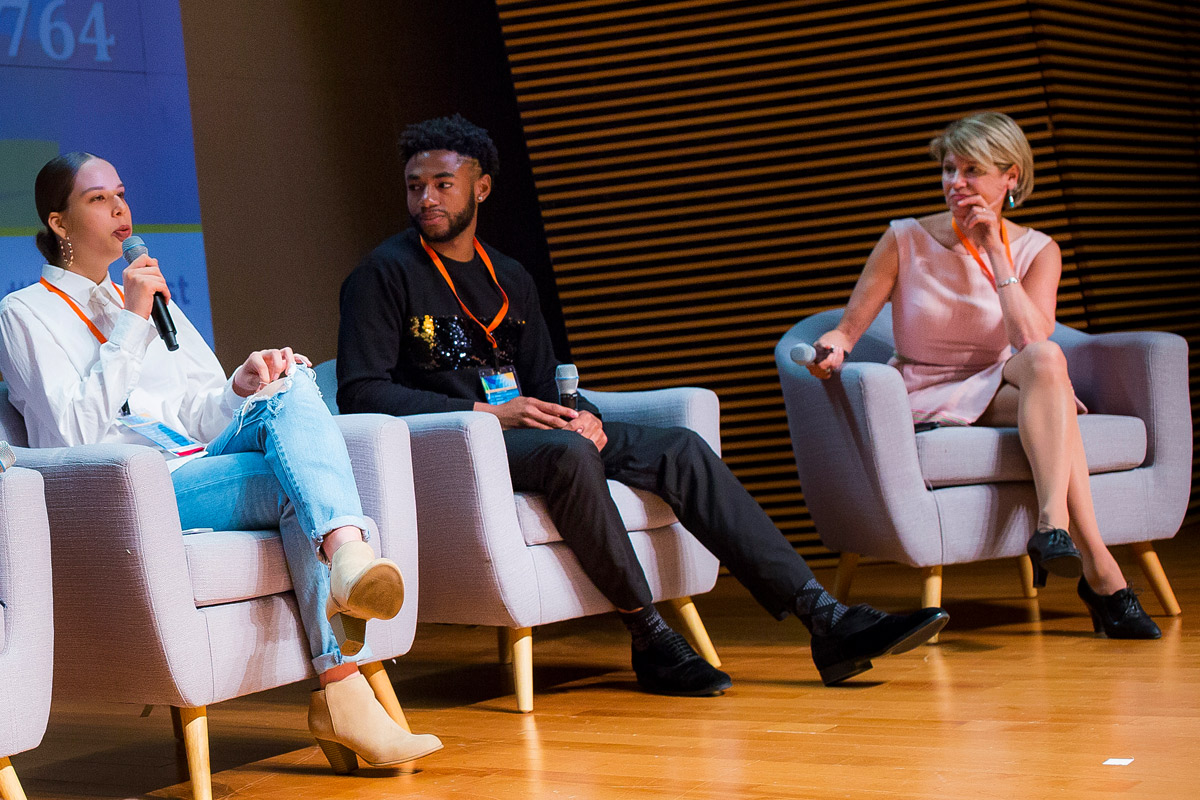 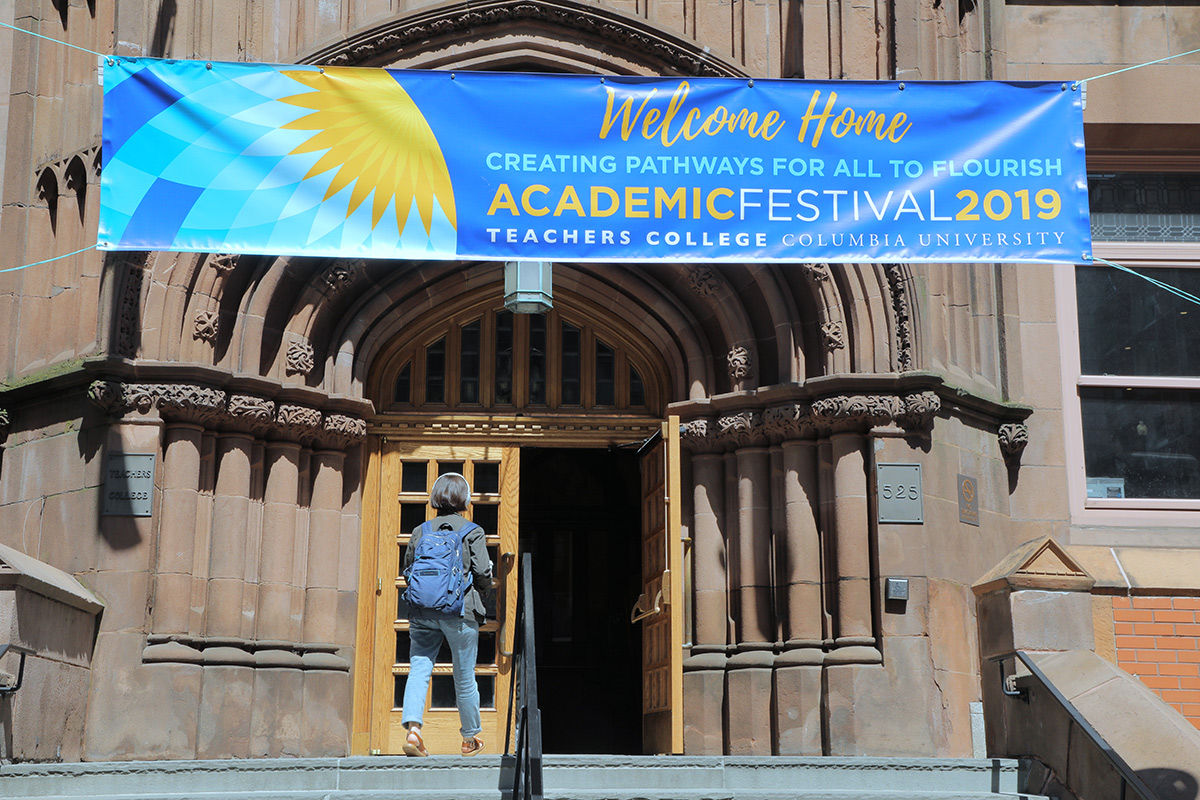 TC AT ITS BEST President Bailey said that the College excels in “applying what we know“ to build on that same capacity in “our students, and in the individuals, families, school and communities that are served by our thousands of alumni.“ 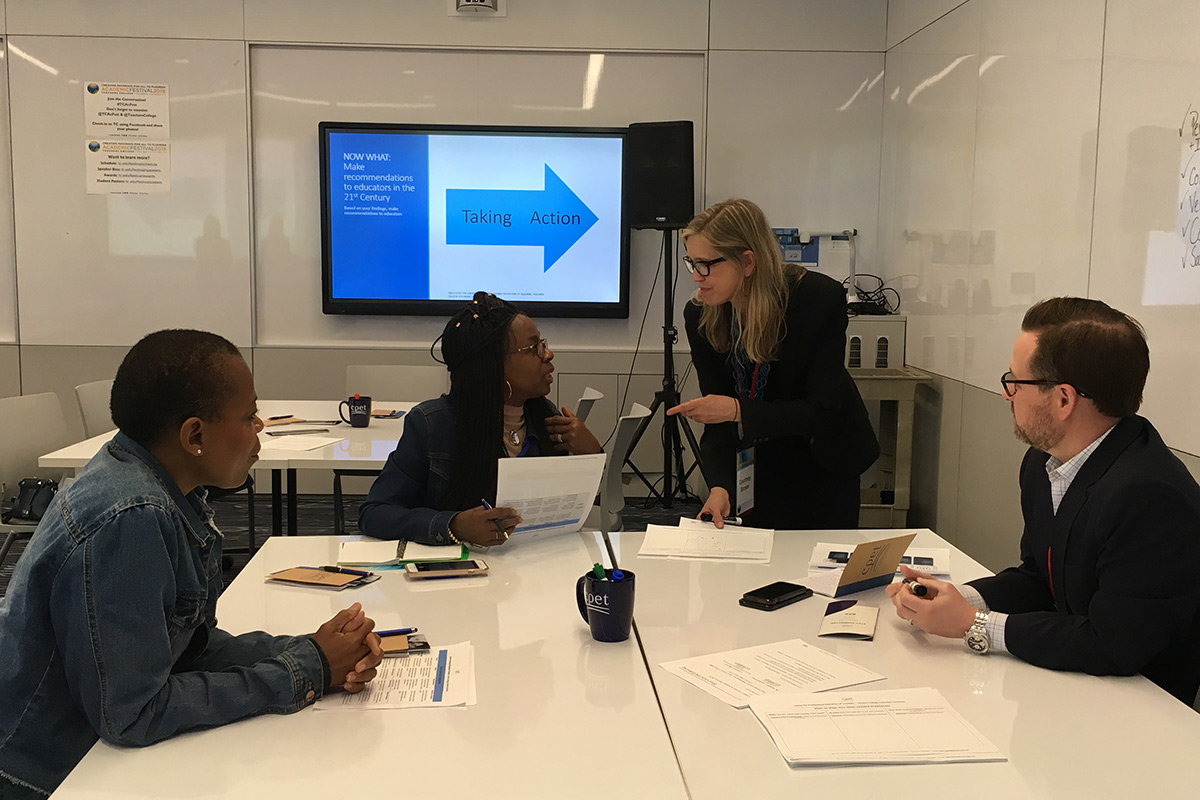 TODAY’S LESSON Leaders from TC’s Center for the Professional Education of Teachers shared insights from the Center’s Global Learning Alliance, which is committed to culturally responsive teaching that builds 21st-century skills. 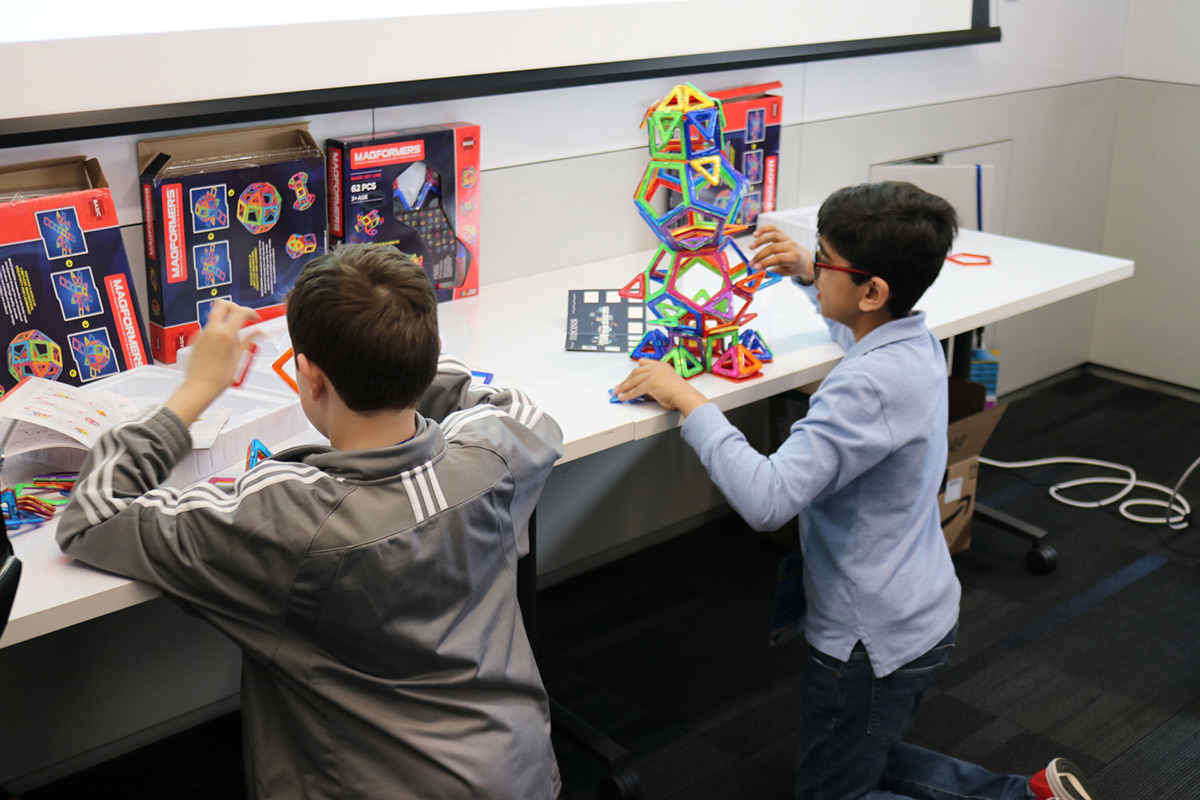 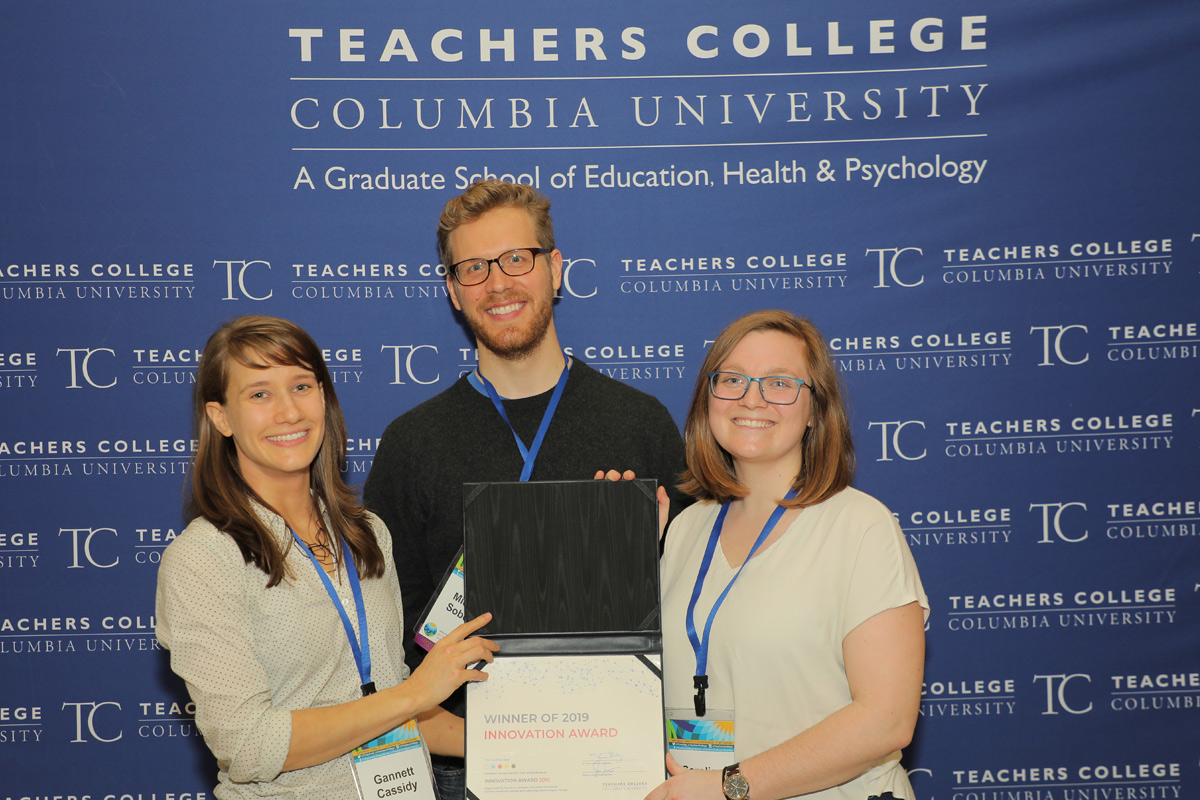 AND THE WINNER IS The pitch for Jam Q, a modular plug-and-play tool that enables young music students to collaboratively control the sounds they make, took top honors – and the “People’s Choice” vote – in TC’s 2019 Innovation Awards competition at Academic Festival. Its developers are (from left) TC students Gannett Cassidy, Michael Sobolak and Caroline Moore. Not pictured is a fourth team member, Tuan Nguyen. 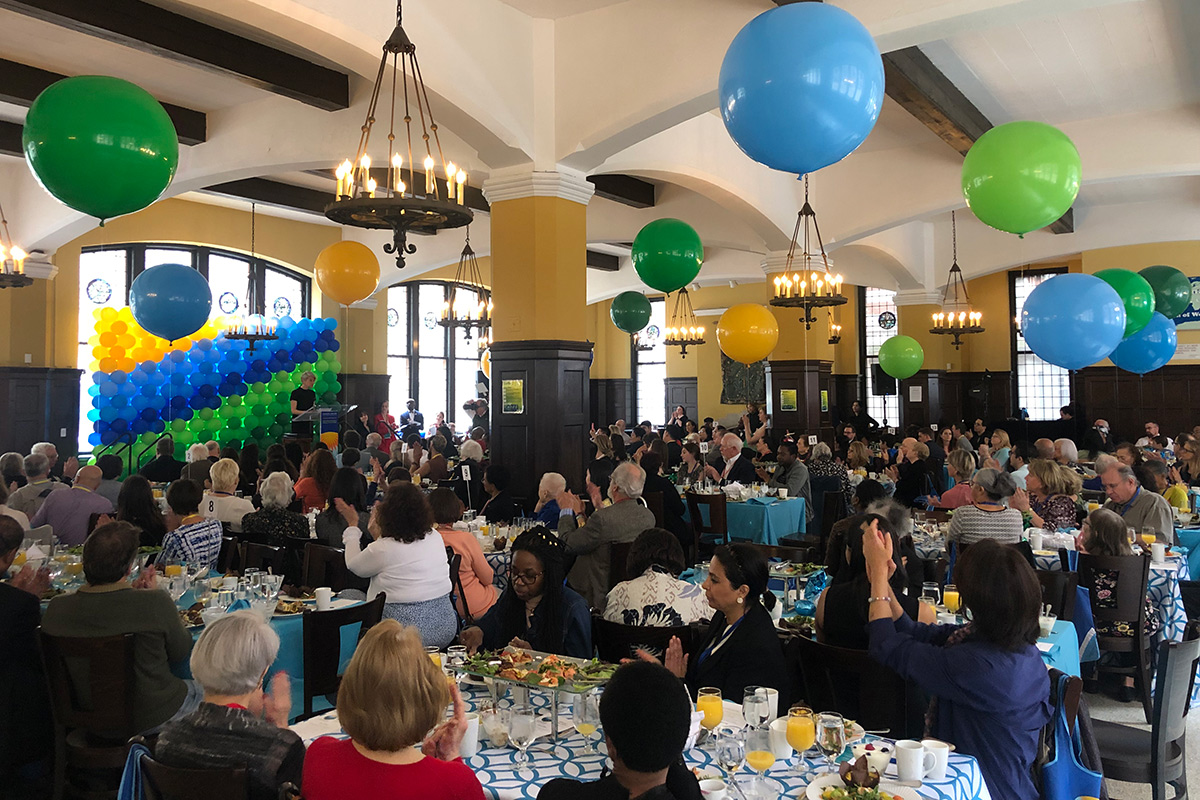 BEST OF THE BEST At a brunch at Academic Festival, TC celebrated an extensive cast of alumni award recipients. 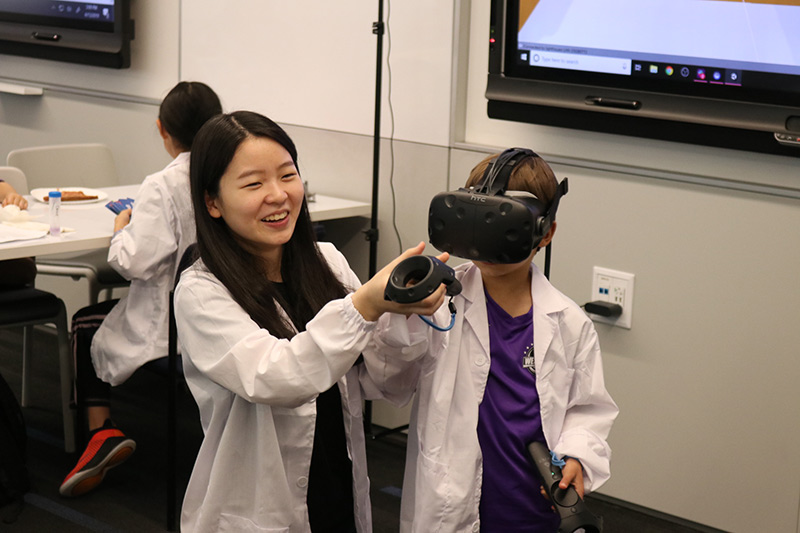 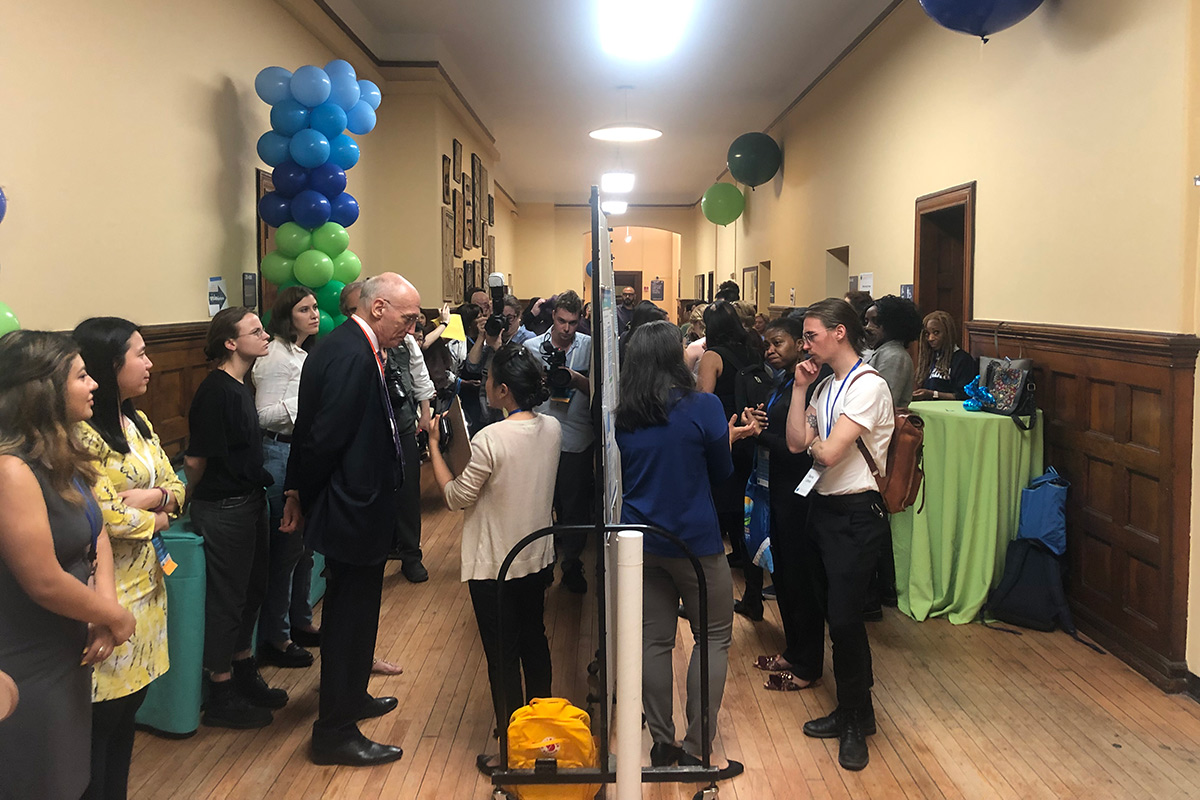 LAST BUT NOT LEAST The day ended with the presentation of student research posters on the fourth floor of Zankel Hall. TC’s president was listening. 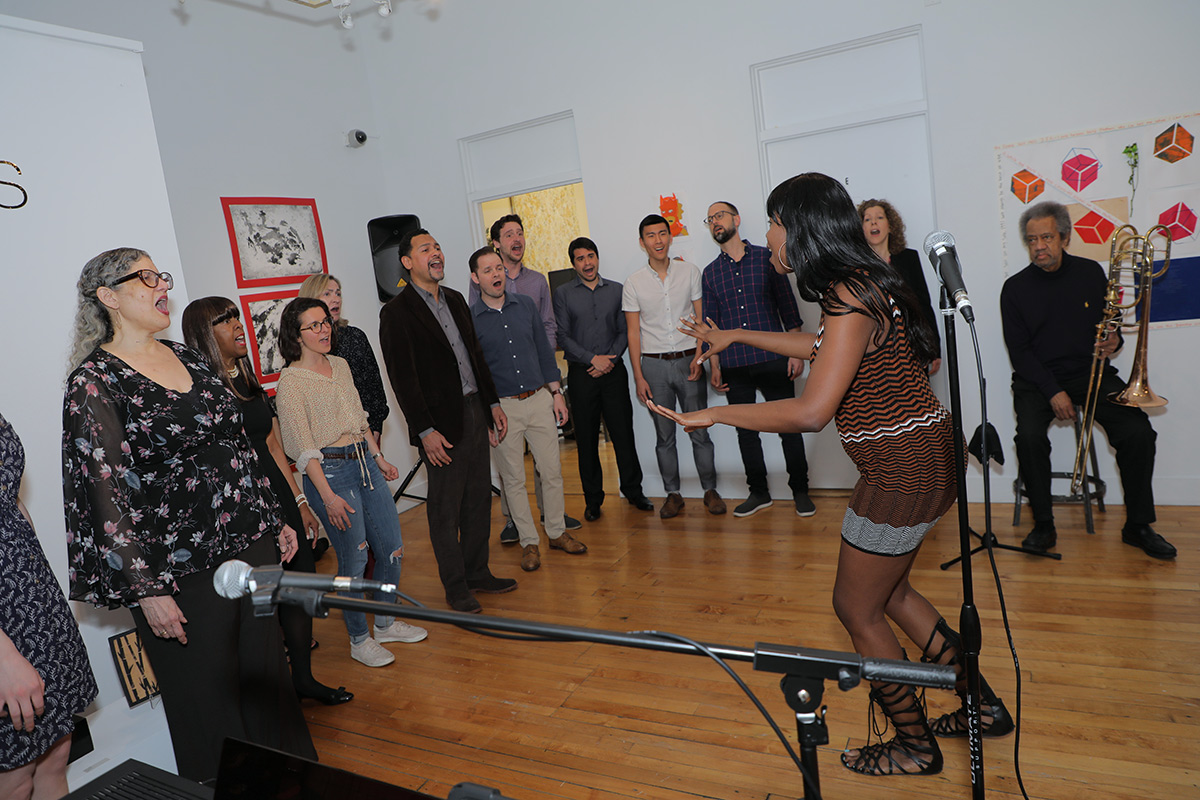 SHOWCASING THE DEPARTMENTS Each of TC’s 10 academic departments held open houses during Academic Festival. This one, in Macy Gallery, was for Arts & Humanities.

“This is not just a New York City problem,” says Rodriguez in the film. “This is a nationwide problem.” Indeed, nationally, the ratio of students per guidance counselors stands at 464:1, and in many schools it is far more lopsided – or there are no counselors at all.

As a result, noted panelist Riddhi Sandil, Assistant Professor of Practice and Director of TC’s College Advising Program, counselors nationwide spend an average of just seven minutes per student on questions raised by seniors during their final year in high school.

“We need to talk about it,” Dressner said. “We need more resources for student counseling in every school and especially schools serving low-income students and students who will be the first generation in their families to attend college.”

To illustrate the odds facing children raised in financially-strapped families, Dressner cited a survey which has found that 95 percent of U.S. students dream of one day going to college. Of that 95 percent, she said, only 9 percent of young people from households that fall into the lowest income quartile actually earn a degree by the age of 24.

“We know what the answer is, we just need to put the resources where they are needed,” Dressner said.

To that end, Sandil said, the TC College Advising Initiative has developed an online course to prepare counselors for a process that requires the delivery of expertise in academic, financial and social-emotional emotional behavior. Thus far 868 registrants have taken the course.

“Our philosophy is to have a counselor look inward before they can help outward,” Sandil noted. “You have to understand your own assumptions when you work with underserved populations.”

To illustrate that point, she cited a moment in Personal Statement when a white college football coach tells Enoch Jemmott that the college wants young men like him from “rough neighborhoods.”

“I would imagine that it’s very isolating when someone in power is speaking to you without having any knowledge of your experience,” Sandil said.

“When we have 17-years-olds making the most important decision of their lives we need to give them the support to do it without getting themselves into the big trouble by taking out big loans that plunge them deeper into poverty than when they started just because they tried to get to college,” she said.

Now enrolled at Queens College, Jemmott has seen the impact of the documentary on adults.

But more important, he says, is the message it sends to young people who are wrestling, as he did, with financial aid forms, admissions standards and a world beyond Brooklyn he once barely recognized.

“They know they can be a voice, be a change in our community and this film proves we have that power.”

Media Literacy: Catching up with the post-Google generations

Legacy: A mother, a son and a question a TC Minority Postdoctoral Fellow continues to answer

Taking TC’s Pulse: A new lab promotes the survival of the fittest – and the not-so

Spotlighting Student Entrepreneurship: At this year’s EdTech Innovation Awards, the buzz was about a tool for getting music students to tune in

Distinguished, by Any Standard: The 2019 Alumni Honorees

Winning a Seat at the Table – and Then Changing the Menu: How education, politics and persistence can change the face of power in America

Leveraging Resources for Student Success: What Different Education Systems Can Teach One Another

Social Justice in Practice, in Schools and Prisons